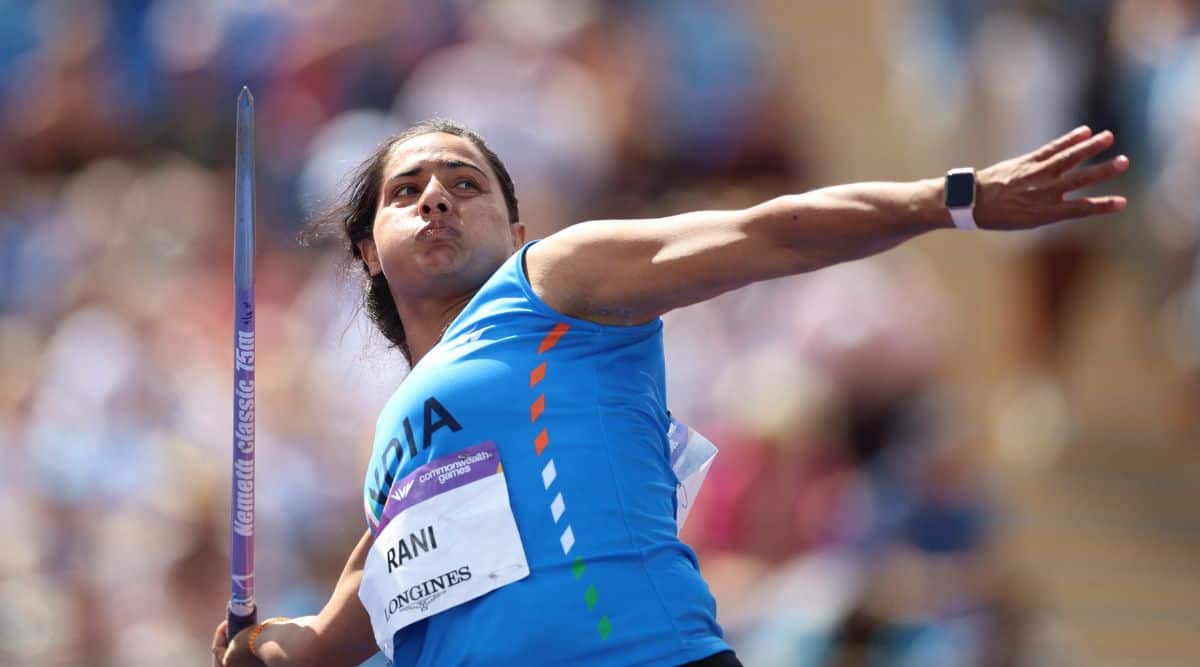 India's Annu Rani in action during the final. (Reuters)

It’s 9 am and India’s finest javelin thrower Annu Rani’s elder brother hasn’t arrived at their home in Meerut’s Bahadurpur village yet for the scheduled interaction. “He’s gone out for a bit and will be back in a few minutes,” informs Annu’s aunt.

Annu, even before she bagged the Commonwealth Games bronze on Sunday, is India’s best female javelin thrower by a huge distance. The 2014 Asian Games bronze medallist has dominated the domestic circuit for almost a decade now and has broken the national mark nine times so far. No other thrower has disturbed the national record book since 2014.

Upendra, drenched in sweat and wearing a soiled sports jersey, parks his atlas cycle. “That’s him,” confirms the aunt. “I was cutting and tying up the sugarcanes into bundles at our field,” he explained. Sugarcane and javelin have a unique connection with this family.

To reach Bahadurpur, a village of 400 families, one has to weave through endless fields of sugarcane. It is at one of these fields that Annu Rani first learnt the art of throwing, not with a javelin but with a cane.

“I was a runner myself but I was always fascinated with the javelin. whenever I went to local meets I used to watch the event. Annu used to play cricket with us and had a strong arm. I asked her to try javelin,” recalls Upendra.

Annu agreed but the immediate hurdle was to find a coach and a javelin. After sugarcane, Annu switched to bamboo before finding a sponsor for a standard javelin. The then 16-year-old was coached by Upendra at the initial stage and even managed to win her first national medal under his guidance in 2011.

“I just learnt by watching other throwers at competitions. I didn’t know the nitty gritty of the sport back then. All I knew was that you had to run, stretch your arms and hurl the spear as far as you can,” he says.

Without specialised guidance, Annu started hurling the 600-gram javelin over the 45-metre mark regularly at school. Annu’s school physical education teacher was mighty impressed by the young girl’s talent and wanted her to participate in district and state-level meets. But here came a big challenge. Annu’s overprotective brother and father did not want her to go out of Meerut for competitions.

“She was very young and we were very protective about her. So we struck a deal with the teacher. She could go out under only one condition: that a family member would accompany her to all her meets outside Meerut,” says Upendra.

But probably Anu’s family didn’t realise at that point that their daughter would soon be travelling across the globe to compete against the best in business. Her exploits in the junior meet caught the eye of the Athletics Federation of India and she was called for a camp in 2010 ahead of the Asian Junior Championships in Vietnam.

“Lalit (Bhanot) sir (now the chairman of the AFI planning committee) called me and said get her passport done and send her to camp. That was the first time we got to know that you need something called a passport to go abroad. Hume laga team ke sath nikal jayegi (We thought she would just leave along with the rest of the team),” says Upendra now laughing at his naivety.

But Annu’s passport formalities couldn’t be completed on time and she missed the bus to Vietnam. “We were actually relieved in a way. We didn’t want her to go to a different country,” he says. But both Upendra and his father had a change of heart when coach Kashinath Naik convinced them to let Annu pursue her dream freely. Naik, who now coaches at the Army Sports Institute in Pune, worked with Annu from 2012 to 2018 where he led her to an Asiad bronze.

“He was a great guy and superb coach. He was the one who refined Annu’s technique and made her the best thrower in the country. We believed in him and Annu progressed a lot under him,” says Upendra.

But Annu’s family was a little too overprotective at that time? “Things were different 10 years back. But Annu has changed the way we think. It is a matter of pride for the village that our girl has gone out and brought us laurels,” says Annu’s neighbour.

Meerut, despite being a sports manufacturing hub, has inadequate training facilities in the district. Its most popular stadium, Kailash Prakash, still doesn’t have a synthetic track and is overcrowded on most days.

Whenever, rarely though, Annu visits home she always talks about her dream of seeing a basic stadium come up in the village. “That’s her dream actually. We have so many athletes in this region but with no facilities,” says Upendra.

A small step was taken a couple of years back when an empty ground was allotted by the village officials to be used as a training ground. “It’s a mud track. Around 30-40 kids come here and train every evening. Maybe now after the CWG medal, they will lay a synthetic track on it,” says Upendra.

Lil B – Net Worth lyrics

Jidenna – Bambi (On The Late Show With Stephen Colbert) (Live)

Cricket in 2020: From bubble ‘prisons’ to BLM, the game confronted reality

Swimmer Kushagra Rawat and his route to Tokyo via Gold Coast