In the last edition at Gold Coast, Indian players were on fire, claiming an unprecedented six medals, including two gold.(FILE)

Star shuttlers, including P V Sindhu, will chase individual gold medals but doubles would also be under the spotlight as India would aim to retain the mixed team title and continue their consistent run at the Commonwealth Games.

Ever since Dinesh Khanna claimed India’s first badminton medal–a bronze at the quadrennial event in 1966 — the country has accumulated 25 medals, including seven golds, riding on individual brilliance.

In the last edition at Gold Coast, Indian players were on fire, claiming an unprecedented six medals, including two gold.

In the individual event, the coveted yellow metal will again be a target not only for double Olympic medallist Sindhu but also for world championships silver and bronze medallists Kidambi Srikanth and Lakshya Sen respectively.

Chirag Shetty and Satwiksairaj Rankireddy too will be keen to change the color of the silver they won on their CWG debut in 2018.

However, more than individual medals, the focus this time will be on India’s performance in the mixed team event.

At Gold Coast, a young Indian team had managed to pull the rug from under the feet of the mighty Malaysians to emerge as champions for the first time. Overall, India still ranks third in the list of medallists with England (8-times winner) and Malaysia (5-time champions) taking the top two spots with 109 and 64 medals so far.

India thus has a long way to go to emerge as a dominant force but they would like to prove that 2018 was not a fluke as they open their campaign in Group 1, comprising of minnows Australia, Sri Lanka, and Pakistan.

While entry into the knockout stage will be a formality, the real test will only start from the quarterfinals.

With the format comprising two singles and three doubles, Sindhu, Sen and Srikanth are expected to get India two points but it will come down to doubles players, especially the world number 8 men’s pairing of Chirag and Satwik to deliver.

While Chirag-Satwik pair is coming into the tournament after playing a pivotal role in India’s epic Thomas Cup win, the women’s and mixed pairings are new combinations and haven’t had a lot of game time.

Gayatri Gopichand and Tressa Jolly qualified after coming on top in the selection trials in April. But the duo skipped most of the Asian leg events post the trials with Gayatri nursing an injury. When they returned at Malaysia Masters, the duo was sent packing in straight games by world number 11 Tan Pearly and Thinaah Muralitharan.

The Malaysian duo will once again stand in their way during the almost two-week-long tournament. 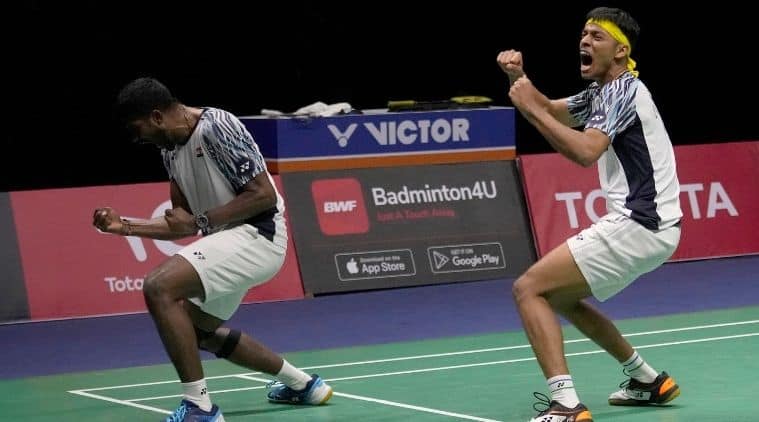 Ashwini Ponnappa, who will be featuring in her fourth CWG, was one of the reasons why India won the mixed team gold as she along with Satwik had pulled off a crucial point in the final. But this time, the 32-year from Coorg has formed a mixed doubles pairing with B Sumeeth Reddy. The duo possesses loads of experience but their pairing is new and it will be a tough task to tame world no. 8 Chan Peng Soon and Goh Liu Ying.

On paper, Chirag and Satwik have a better chance of beating world number 6 Aaron Chia and Soh Wooi Yik even though they lost to the Malaysian pair in Asia Badminton Championships. Also, Satwik, the 21-year-old from Amalapuram, had pulled a muscle at Malaysia Open and it needs to be seen how he goes about his job.

In individual events, a gold medal has eluded Sindhu, who returned with a bronze and a silver in the last editions. However, she will start as a favorite for the title this time with some competition coming from Canada’s world no. 13 and 2014 champion Michelle Li, Scotland’s world no. 18 Kristy Gilmour, and Singapore’s world no. 19 Yeo Jia Min.

In the men’s singles, Lakshya and Srikanth, who had fashioned India’s epic Thomas Cup win, will turn into foes as they chase the title. The two are coming into the event after recovering from some minor niggles. While Sen had a small shoulder issue in Indonesia, Srikanth was bothered by a pain in his heels.

Srikanth had missed out on the yellow metal in 2018 after going down to Lee Chong Wei in the finals, while for All England finalist Sen, it will be a golden opportunity to go all the way to the Arena Birmingham on his debut.

The duo will face fierce resistance from world champion Loh Kean Yew and Malaysia’s Ng Tze Yong, who made it to the team after the withdrawal of world no. 5 Lee Zii Jia.

Chirag and Satwik too have been in good form with a Super 500 title to boast at India Open but the two will have to contend with England’s Ben Lane and Sean Vendy, besides Aaron and Soh on way to the coveted gold.

Gayatri and Tressa, on the other hand, created a flutter when they shocked last year’s World silver medallists, Korean second seeds Lee Sohee and Shing Seungchan on way to the All England Championships semifinals. But the road to the podium will be a tough one with the English pairing of Chloe Birch and Lauren Smith and Canada’s world no. 23 Rachel Honderich and Kristen Tsai also in the fray.

In the mixed doubles, Ashwini and Sumeeth will need to bring their individual experience to the fore in a draw that boasts of the world no. 10 pairing of Tan Kian Meng and Lai Pei Jing from Malaysia, and the English world no. 11 combination of Marcus Ellis ad Lauren Smith.

Joseph Bosco – Much More Than lyrics

Unvaccinated Novak Djokovic says he is out of Indian Wells, Miami