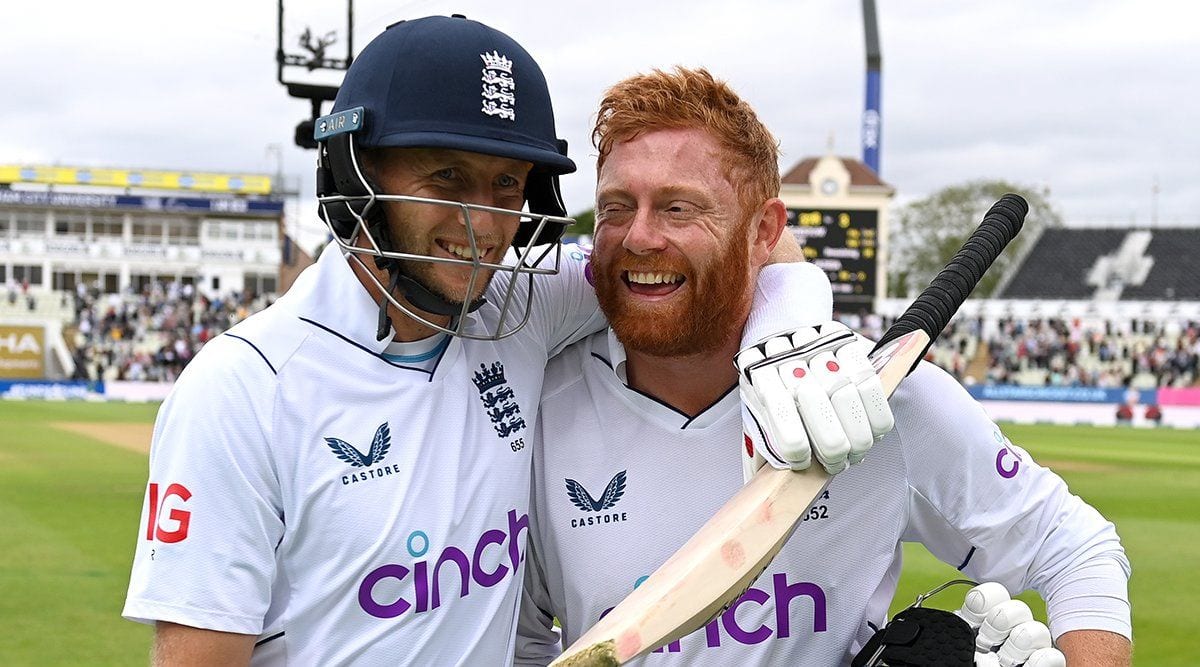 An all-smiles walk back to the dressing room for Joe Root and Jonny Bairstow after England's win over India at the Edgbaston Test. (Photo: @ECB_cricket/Twitter)

Star England batter Jonny Bairstow has credited his sensational run of form in the past five Test innings, including the two against India, to freedom from COVID-19 protocols and role clarity under new head coach Brendon McCullum.

Bairstow struck 106 and 114 not out to play a major role in England’s seven wicket win over India in the rescheduled fifth Test which the hosts won here on Tuesday. Before that, he scored 1, 16, 8, 136, 162, 71 not out in the three-match Test series against New Zealand which England won 3-0. “It’s the freedom we have now. We’re not in hotel rooms, bubbles, having to do Covid tests everyday and we can do normal things like go to the shop, go for a beer, see your friends and family,” Bairstow told the Tailenders podcast.

“All of those things accumulate together and obviously the excitement of working with Baz (McCullum) and the clarity he gave everyone.” England’s four successive Test victories recently have come playing aggressive cricket under New Zealander McCullum. Bairstow missed the beginning of the county season this summer as he was playing in the Indian Premier League. But McCullum told him that would not affect his place in the Test team.

ALSO READ |England vs India: How Bairstow overcame personal tragedy and doubts to become a beast of a batsman

“Before we played New Zealand, there was chat about going to the IPL and not playing county cricket but Baz phoned me, said I was batting five in the Tests, to get my head around it and crack on,” Bairstow said. “Baz also spoke to me a bit about imposing myself on the game – nothing technical. That can be tricky in red-ball cricket because you don’t want to look like you’re slogging.

“I had two nets before the first game so finding the balance was interesting. I played a shot-a-ball at Lord’s (scoring one and 16) which didn’t go down too well and then found the balance better at Trent Bridge (scoring 136).” Veteran England fast bowler James Anderson said Bairstow was inspired to score his first-innings century against India after being sledged by Virat Kohli. “Jonny was 80 not out and Virat had been going at him and sledging him a lot,” said Anderson.

“I don’t know if you saw the strike-rate difference? His strike-rate was about 20 before Virat started sledging him and about 150 after.” During the morning session of the third day of the fifth Test on Sunday, Kohli had something to say to Bairstow about his ‘play and miss’ game but the England batter wasn’t someone to take it lightly.
Top Sports News Now

The duo had a heated verbal exchange and at one point, the umpires had to intervene to cool down tempers. “His (Bairstow’s) first words back in the dressing room at lunch were: ‘When will they learn to shut it?’ If there’s somebody you don’t want to rub up the wrong way, it is Jonny Bairstow,” said Anderson.

When you train with best, you only get better: R Sai Kishore