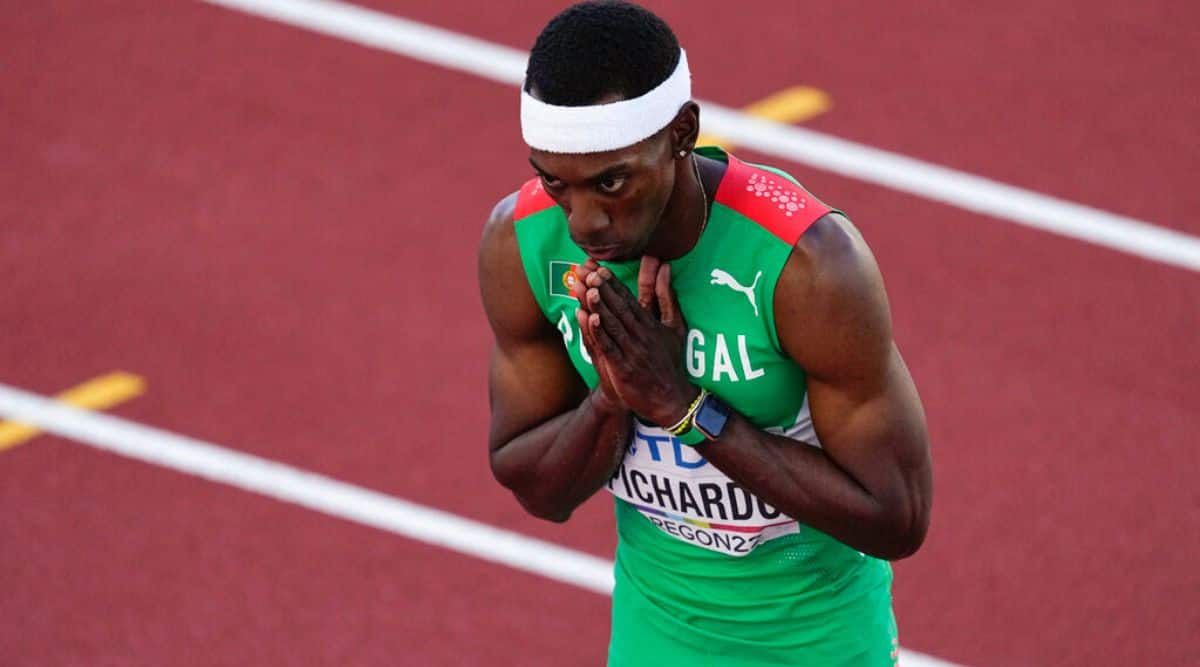 The triple jumper Pedro Pichardo disappeared from his room one day in April 2017 in Stuttgart. He had entered that competition in Germany as a Cuban but became a ‘deserter’, and escaped along with his father and coach Jorge.

On Sunday, he won the triple jump with ridiculous ease as a Portuguese athlete. Once the volunteer gave him the Gold, soon after his last attempt, he took it out, hopped over the rails, hugged his father, and hung the medal around his father’s neck. The father and coach protested but Pedro wasn’t listening. Beaming smiles on both.

It was for his father that he had left Cuba. It was his father that made him a champion. The short story is that he had been having issues with the Cuban federation for a long time, even being disqualified by them for six months in 2014, as he wanted his father to be his coach, and they didn’t. Among other issues, for sure. He decided to leave his country.

Gold medalist Pedro Pichardo, of Portugal, poses during a medal ceremony for the men’s triple jump at the World Athletics Championships on Saturday, July 23, 2022, in Eugene, Ore. (AP Photo/Gregory Bull)

His mother was still in Cuba when they had left. His beloved dog, a huskie, died and he would cry, Portuguese media would report then. Soon, the mother joined them, a new dog came into his life, and he went to training with his father, without whom nothing special would have perhaps happened.

The father Jorge had studied all the great triple jumpers and came up with a crazily unique technique – a fusion of the former greats. A mix of Russian, American, and English after he studied Jonathan Edwards, Phillips Idowu, Mike Conley and some Russians.

“The way I jump today, it’s because my father studied it,” Pichardo once told reporters. “He tried to do a crazy technique, a mix of the Russian technique with the American and the English one. Each one is different, the start angles, the technique with the arms, the movements, it’s very different. He tried to get the good things from those countries and jumpers to bring them to me. He taught me everything. He is still studying to see if we can achieve a (world) record and jump further.”

The father would go to work on his sketchbook – stick men populate it, various angles, the starts, the hops, the final leap – everything sketched, and explained to his son. “My father has booklets with sketches, with stick men, angles and everything. It’s a unique technique.”

Powered by his father’s zany creativity, Pedro went to work. He has an indefatigable spirit, that helped with all the controversies and struggles. “I would like people to think that Pedro is the person who never gives up,” he says. “I want to show people that you can never forget about the dreams you have in your life, never, despite the problems, despite the high mountains you might have to go through… whatever it is, never give up, go until you reach your dream,” he told Red Bull.

“Sometimes the finish line is very near and we get to a point where we decide to stop but we have already made it a long difficult way, and we are almost there but we don’t know it. And sometimes near the end, we give up. What was left has a small river and sometimes we get tired. Don’t give up, just go across the river.”

Time and again, he has spoken about his gratitude to Portugal for taking him in, and supporting. He has vowed that he will give back to the sport in the country. ““I would like the future for athletics in Portugal to have a path. I don’t want that I finish my career and that there’s nobody else in triple jump. I would like that instead of five Olympic champions in Portugal, there are 10 or 15, like in Cuba, for example. That’s a lot.”

“My father taught me how to jump the triple jump. He taught me the technique to do it. The way I jump today, it’s because my father studied it,” reveals Pichardo. “He sat down, once we took triple seriously, and he studied several jumpers – Jonathan Edwards, Phillips Idowu, Mike Conley, many from different countries, some Russians too.

The father and son are in pursuit of Britain’s Jonathan Edwards record leap of 18.29m. Pichardo’s best is 18.08.

Even as he won the Gold on Sunday, Pichardo would say,The opening 17.95m ended up being the winning mark. I opened strongly,” Pichardo said. “This world title was elusive to me.”

Edwards had leaped 18.29 in 1995 world championships in Gothenburg.“The moment I knew it was better was during the step because I just had to wait and then put my foot on the ground,” he says. “There’s just a brief moment when my front foot feathers a bit because the transfer from the hop to the step was better and I just had to stabilise a bit. As soon as I landed, I knew it was a world record, I knew it was further,” Edwards had told Worldathletics.org. “That’s why I stood up and shrugged my shoulders as if to say ‘that’s another record’.

“I still had another 11 centimetres to spare on the board. So if someone does ever break my world record, I’ll say actually I was 18.40m from take-off to landing.”

Perhaps, one day, the 29 year old Pedro Pichardo will leap beyond that. “Winning a place in history – that’s what I would like to do. In the future, I want people to recognise me, like Usain Bolt or Cristiano Ronaldo, for doing something important.”

Subscribers Reading NowRanbir Kapoor's return to the big screen with ShamsheraA brush with beauty & mortality in Bhutan, Land of the Thunder DragonShahidul Alam speaks about the repressive terrain in BangladeshShamshera movie review: This film is big, bad, loud and messyColleagues recall the singer-composer-guitarist, Bhupinder SinghMental health: When is the right time to seek help?