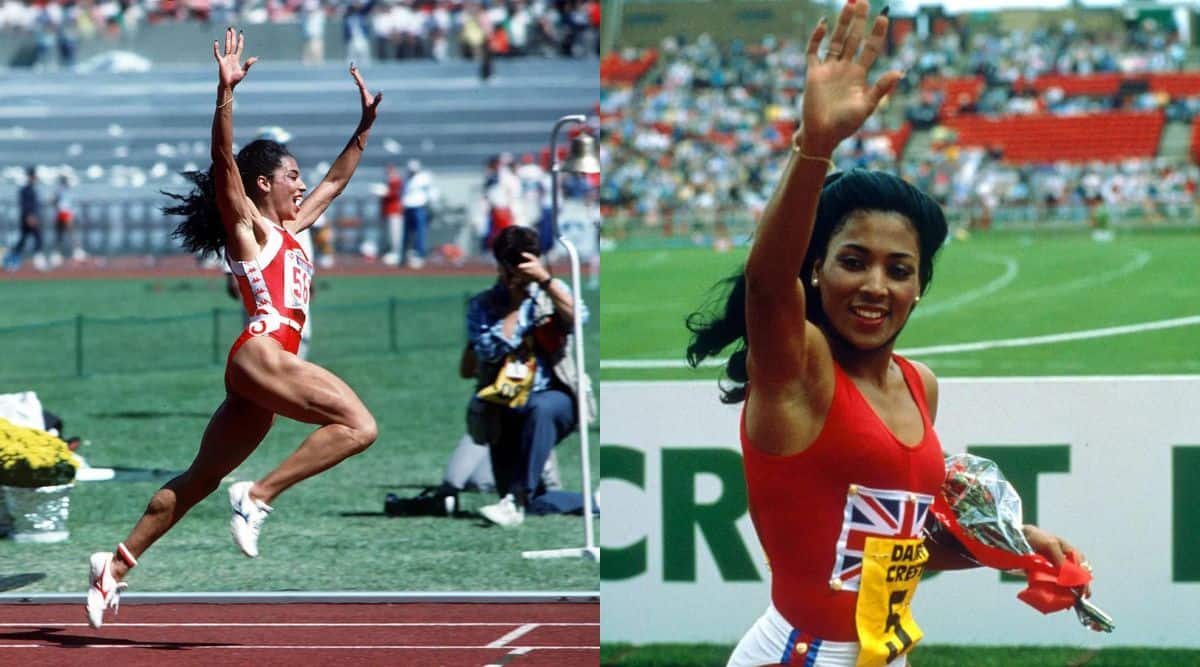 “The fastest living woman!” The commentator would boom just as Jamaica’s Shericka Jackson blurred along the track, arms pumping, knees kicking, to an incredible time of 21:45 to take gold at the World Athletic Championship. She still would be the second-fastest woman in history. The fastest was the great Florence Griffith Joyner, aka Flo Jo, who lived a fast dreamy life as a runner, a free spirit, an ebullient fashionista who the famous singer Beyonce would nod her respects to, once wearing a ‘flo-jo’ costume, and who died tragically young, in her sleep after an epileptic attack, a death that she had premonitions about for a while. They say it’s better to die young than fade away and Flo Jo unfortunately became its most famous symbolic figure. But boy could she run. Her life is quite a story.

Controversies tailed her. No one could catch her on the track; plenty tried off it. Her fans would say she ran like the wind; critics said she was wind-aided. Her power was feted around the world; some whispered it was drug-fuelled. Her style made the world go gaga; the haters mocked the six-inch vibrant fingernails. Beyonce wore her bodysuit; they said Flo-Jo’s career was a case of style over substance. She retired in 87’ to have a child; they said she ran away in fear of dope-tests. She never failed a single drug test. She was tested 11 times in Seoul alone, nothing illegal was found. She had premonitions about death, knew only death could catch her; and it did.

But her last act was her greatest posthumous run. With her death, and his second marriage, a promise that she had wrung out of him during her premonitions, her daughter Mary had started to drift in life. As a 7-year old, with her father a broken man, it was Mary who called the near and dear ones to tell about her mother’s death. The mother’s void would catch up with her, and she drifted into teenage years, distant and gripped by blues.

It was then her father produced Flo-Jo’s letters to her – labelled “not to be opened until you turn 16”- and joy for life returned to Mary. She became a singer-songwriter, performer, and she sang at the Olympic track and field trials in 2012. It’s her mother, who was the rockstar of track and field, though.

Incredibly, in 1985, after she had won gold at the ’84 Olympics, Flo Jo was working at a bank. The training and runner’s life had receded, and her main side hustle was styling – manicuring nails, fashioning clothes. She had started off as a bank teller before cashing her fortune at the tracks, but once again receded to the grey banking world. She would do her friends’ nails and hair in the night, charging 45$ to 200$ for intricate braiding.

Overweight (her coach would say she was 60 pounds heavier), but unburdened by the world, she was living her life when her coaches, the husband Al Joyner and his brother in law Bob Kersee stirred her into action. Her husband Al, whom she met in 1980 and married in ’87, was a triple-jump Olympic champion and brother of Olympic heptathlon and long-jump legend Jackie Joyner-Kersee.

The marriage propelled her to return to tracks. She would work out at 4 am. Moved by the Canadian Ben Johnson’s power start at the 1987 World Championships, Al had her ramp up her weight training. Reportedly, weighing 130 pounds, she could squat 320 pounds. “To run like a man, you need to train like a man,” she would say.

But before the epic running in Seoul 88, came the fashionista. “Dress good to look good. Look good to feel good. And feel good to run fast!” she would say. Six inch acrylic nails materialised, the hair flowed, face sparkled with makeup and her self-designed running kits were a rage – from one-legged bodysuits, hooded speed-skating bodysuits, colour-blocked bikini bottoms, detailed lace-onesies, and asymmetrical outfits. Flamboyance had a second name: Flo Jo.

The fashion sense was innate. She could knit, sew, and crochet. From 7, she was flirting with her own designer clothes. Around the late 70’s, early 80s, before she had become famous, she would run in New York and caught the eye of the famous running coach Pat Connolly who once wrote about that moment in NYT: “She was so pretty, my eyes often followed her as she jogged by. I had to control an urge to engage her in conversation, to ask if she was a singer. There were no outrageous fingernails or hair styles yet; no one-legged tights; no layers of make-up; no bulging muscles to power strong mechanical strides. What I saw was an intensity in her dark eyes, the kind that comes from hunger; the kind that revealed that this young woman had heart.”

And her heart was free and quirky.

“You can wear anything you want if you’re ready to go when the guns go off. You’re going to run fast regardless. Make-up is not going to stop you. The outfit is not going to stop you,” is one of her famous quotes. In 1988 she began wearing what she called “one-leggers”, which came about after she accidentally cut one leg shorter than another. “I started laughing and she said: ‘I’m wearing this.’ And that’s how it started,” said Joyner. All around her home, she would stick little motivational notes. The timing she wanted to win a race, quotes from the 23rd Psalm of the Bible, and her most favourite was “I can because I believe I can.”

The training raged on before Seoul. So did her love for clothes. She packed over 100 outfits, her husband would say with a laugh. She painted her six-inch fingernails on fleek with red, blue, gold, white. She was ready to walk into dreams of athletic kids with aspirations, girls desiring empowerment to be themselves like the tennis star Serene Williams, wide-eyed kids, and adoring, amused grown-ups.

“I spend about 15 minutes putting on my makeup,” she once told The Boston Globe. “I spend a lot longer getting ready for a race.”

On a Jet Fuel

On 16th July 1988, in trials at Indianapolis ahead of Seoul, the jaws of superstar athletes and coaches would drop in awe. In 100m, she was after Evelyn Ashword’s record of 10.76. Her husband would keep urging her that she could do it as 10.5 was his timing, and she beats him in training. When the clock stopped after the run, the world stopped in awe: 10.49, it shone.

“No one can run that fast. The heat must be doing something to the electronics,” ABC announcer Marty Liquori said. Omega Timing investigated the wind-gauge and timing system and found no malfunction. Still, many, including her husband, do believe it was wind-aided. Later, the Association of Track and Field Statisticians would asterisk it with, “probably strongly wind-assisted, but recognised as a world record’. Next day, in the final, she still created a record, blazing across in 10.61 seconds.

“If you go back and look at the film of her running mechanics in ’84 and then look again at ’88, that’s the difference. That’s the secret. Hard work, sleeping right, eating right. And then she had a special gift from God,” Al Joyner told BBC Sport. “I said: ‘Honey, go out there and make them think you’re on jet fuel’.”

At Seoul, she ran the 100 m in 10.54 (wind assisted), in her last five metres her arms were flung out aloft and a glowing smile spread across her visage. One of the great sporting photographs of our times.

In the 200m semi-final she broke a nine-year old world record before, in less than two hours, she would break it again in the final, shimmering across in 21.34 seconds. It’s been 34 years, no one has caught up with her yet.

Death did. In 1998, at the age of 38, a rare disease and lesion on her brain that caused seizures, a problem (cavernous angioma) that had only surfaced after her daughter’s birth, Flo Jo died in her sleep.

The husband Al dialled 911, crying, “my wife’s gone. My wife’s gone.” They asked him to perform CPR but he could find no pulse. Later he would recall speaking to her, “this is not the way the story is supposed to end. I’m supposed to go before you. You are to watch Mary grow up …” Just then Mary would run into the room, “what’s wrong with Mommy?” The paramedics arrived just then, and soon proclaimed her dead. In layman’s terms, she had choked in her sleep.

The paramedics would hand him their wedding ring and a fingernail they had broken. The critics still murmured about the effects of drugs. The extended autopsy and toxicology tests conducted over two days snubbed them: it didn’t reveal any use of steroids or performance-enhancing drugs in her system. “She took the ultimate drug test. I told them to test for everything,” Al would tell Espn. “And there was nothing there, and there never was.” Nothing but a great spirit.

Sabrina Peterson Told T.I & Tiny Harris She Will Drop Lawsuit If They Apologize

Silverchair – Anthem For The Year 2000