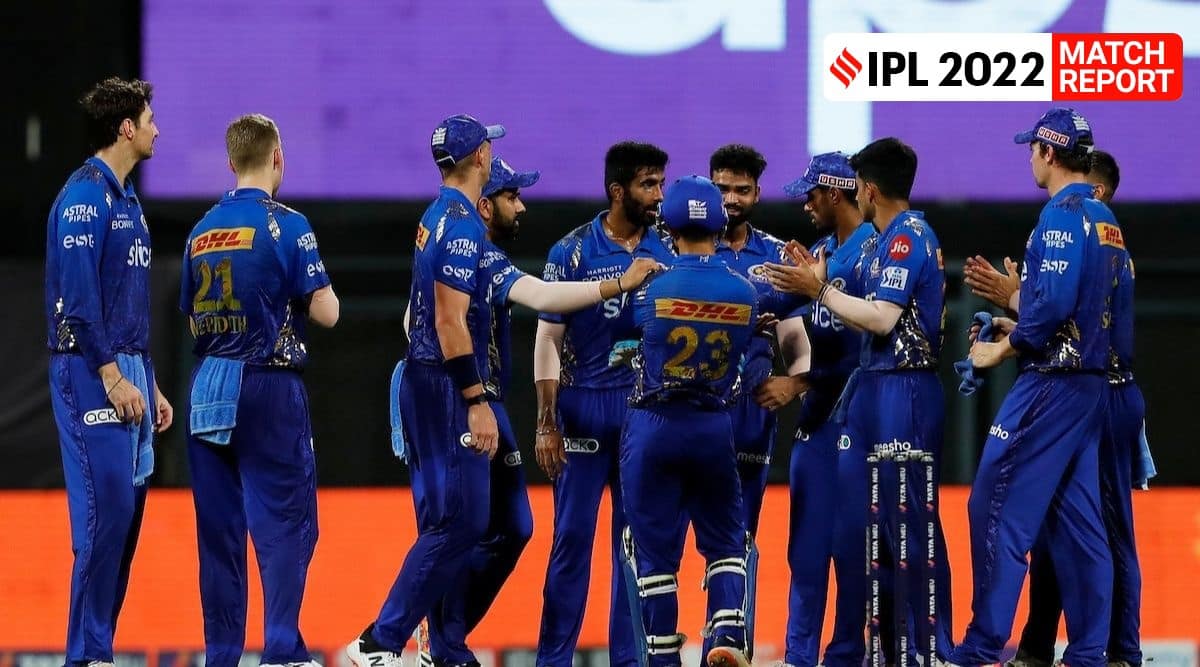 In an astonishingly low-quality display where batsmen seemed to be competing as to who could get out more poorly on a pitch with some live grass, a knocked-out Mumbai Indians dismissed Chennai Super Kings for 97 to end their playoffs hopes.

Right at the start of another match they needed to win to keep their razor-thin hopes alive, the lights literally went out on CSK. A power disruption knocked out the Decision Review System. The DRS was back by the fourth over of the CSK innings, but it was too late; Devon Conway had been given leg-before by umpire Chirra Ravikanthreddy off the second ball of the match from Daniel Sams. Replays suggested there was enough angle on the delivery to have most likely missed leg stump, considering it had struck Conway in front of leg. That was the only decision CSK could have put down to misfortune, for they proceeded to irredeemably seal their fate by their own hands.

How it all started!

2 in 1: Daniel Sams’ blistering opening over.

Moeen Ali thought about a pull off the brisk and bustling Sams, he then thought about aborting the pull, and finally settled for a nothing hack to short midwicket. Robin Uthappa was given a torrid Test-match like working-over by Jasprit Bumrah, and even DRS wouldn’t have saved him if it was available.

Almost as if trying to outdo the implosion of the first three wickets, the others found various ways of getting out. Ruturaj Gaikwad nicked Sams to the keeper down the leg side, Ambati Rayudu managed to nick Riley Meredith behind off the inside edge from the off-stump line. Even the powerplay was not done yet, and CSK had lost half the side for 29.

Daniel Sams picks up his third wicket and Ruturaj Gaikwad departs for 7 runs.

Shivam Dube walked in and almost lofted one straight to extra cover, just clearing the fielder, and prompting MS Dhoni to walk up to him. That quietened Dube for a bit, but he soon departed caught-behind trying to slash Meredith over the keeper.

Shane Watson, the former CSK all-rounder and current Delhi Capitals assistant coach, had told The Grade Cricketer that he felt sorry for Ravindra Jadeja, who had been given the CSK reins earlier with the overpowering presence of Dhoni always around. As he stood motionless at the non-striker’s end, an arm on his waist, Dhoni himself cut a forlorn figure watching his team crumble.

It was like the regular Dhoni show was playing out in a parallel universe. The standing ovation when he walked out to bat at 17 for 4, the chants of ‘Dhoni, Dhoni’ when he eased Sams through cover for his first four, his typically calm picking of the gaps, the couple of sixes that sent the crowd wild, even the unsuccessful dash after leaving a bouncer to try and retain strike with No 11 at the other end; all of it appeared to be happening inside a cocoon where reality doesn’t matter. And the reality was that CSK had been dismissed for 97 in 16 overs, and their campaign was all but formally over.

The impressive Mukesh Choudhary moved the ball back in consistently into the right-handers and MI were reduced to 33 for 4 in no time. The leg-before of Sams was so plumb it was remarkable Tilak Varma implored a visibly reluctant Sams to review. MI eked out the remaining runs in a mixture of inside and outside edges. It took them almost 15 overs to put an end to the shambles. The 30.5 overs on an utterly forgettable night were the surest evidence that these two teams have earned and deserved the ninth and tenth spot in the table this season.

The architects of West Indies’ Test wins under Jason Holder