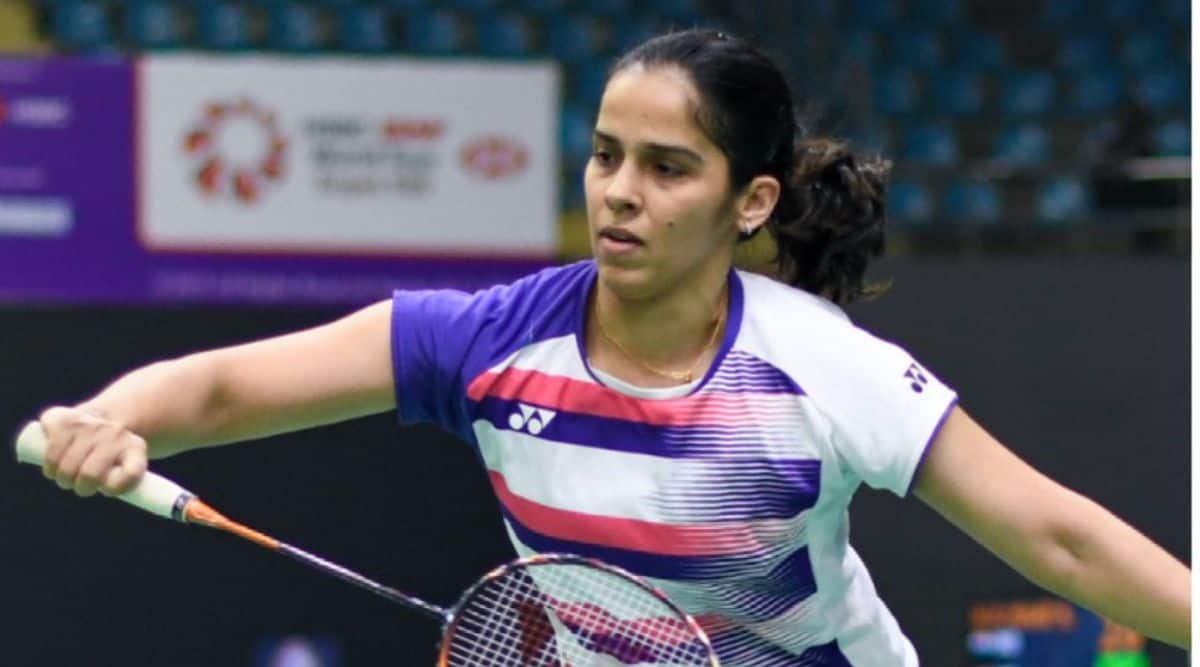 Saina Nehwal in action during her win against He Bing Jiao. (Photo: @BAI_Media/Twitter)

They do that to check the hovering winds – just a pre-match warm-up hit-about to gauge drift on badminton courts. Saina Nehwal though, was prepping to brew one right storm.

Playing Chinese Olympic semi-finalist, World No 9, He Bingjiao in Round 2 of Singapore Open Super 500, Nehwal started with an inadvertently blistering warm-up. She exchanged three snarling rallies with the Chinese southpaw in warmup, of 13, 15 and 19 shots each.

The last one got properly testy as both retrieved low shuttles, unwilling to let go, which had nothing to do with reading the whirling winds of tosses flying past the baseline. It was in the thwack to two of those strokes that Nehwal made her first point. Bingjiao can get bullied on court as PV Sindhu has repeatedly shown, but the Indian on the day, threw the first punch even before the 0-0 start.

Then in the first point, she sent down a scathing unreturnable shot. The mid-set punctuation notwithstanding, Nehwal looked in no trouble, winning 21-19, 11-21, 21-17 in 58 searing minutes.

There were more than a handful of the vintage Nehwal smashes – wide-rimmed, short and whiplash. Two of those, with  audible power behind them, actually pinned He Bingjiao to the floor in defense, as she recoiled under the force on 16-14 and 18-14 in the decider.

When Nehwal started out on the international circuit almost 16 years ago, her solitary weapon was that stinging smash with which she rattled the best out there. Her game has broad-based into other realms of trickery, but the smash hasn’t blunted. A set apiece, Nehwal blitzed to 11-5 in the decider on the back of a particularly stormy shower of three smashes charging the net to boggle Bingjiao.

Earlier in the first, Nehwal struck a good length, and controlled play from the T-intersection – 80 per cent of her points came from early anticipation and interceptions at the net. Nehwal’s always had laboured movements to the four corners, but read shuttles early. But the most visible improvement in last few months has been her assured lunge, while earning milli seconds on the forecourt flicks which she uses to disperse the shuttle. The bending that earlier would seem like a plod, was an agile stride repeatedly lobbing the challenge back to Bingjiao.

Hard to tell if it was the drift, or Bingjiao’s rattled mind, but Nehwal wasn’t pushed to the corners on the day, until the Chinese coaches pleaded urgency with their player and like a roused dragon, the southpaw started to make the Indian star move in the latter half of the decider. But in the early short exchanges, Nehwal ruled from the net with mostly straight returns till 14-10. As if hypnotised, Bingjiao kept playing to her hand, and Nehwal let rip when things got even at 19-all to take the opener.

READ |Husband-coach Kashyap on Saina Nehwal’s CWG non-selection: ‘It’s about your own people treating you like s*#@.’

The 33-year-old was outplayed in the second, but took a 3-0 lead straight away in the third, resuming her aggressive stomping at the net. “Her movements clicked into place today. I’d keep yelling at her asking where is the perfection in the match that she shows in practice?” coach Kashyap said.

He reckons it was all coming together at Malaysia, though her mental muddles were inhibiting her game. The Axiata arena on Day 1 with Nehwal banished to the corner court against Koream Kim G Eun was also a torrid start. “You could fly kites on that court, it was that windy,” Kashyap laughs, adding seriously, “Also there was a huge backlog of losing matches the whole year so confidence took time to return. Saina’s X-factor has always been how badly she wants to win. But her body was not giving her a chance to fight till now.”From 11-5, the Chinese narrowed the gap to 14-13. It’s when the Saina of yore, pushed on the accelerator, with coaches Kashyap and Guru Saidutt shouting themselves hoarse to pump up the aggression. In their only meeting prior, Nehwal had beaten He Bingjiao at the 2019 Indonesia semifinals – incidentally her last title (won when Carolina Marin cracked her knee painfully in the final). That had been a 3-set affair too, but memories of winners were vivid for Kashyap who sat courtside then too.

“At 14-13, Bingjiao was finding her defensive rhythm and the Chinese coaches were guiding her to get Saina moving. It’s when Saina pushed really hard. It became physically bruising and boiled down to who wanted the win a little more,” Kashyap said.

It’s where she could summon the big biting smash that began its backswing in the warmup, leaving a shadow of fear on He Bingjiao. Nehwal would put in everything into the attack and stub Bingjiao, moving away at 18-14. The conditions favoured Nehwal’s hard-hitting attacking style of play. But she still needed to flex the sinews to draw out the strength to power her smashes and ended with the Chinese sailing wide. When Bingjiao got drawn into a 19-shot sparring at 0-0, she had sensed the smidgeon of menace that would bookend this contest. It was a simple Round 2 exit for the graceful Chinese southpaw. It meant much more to the Indian.

PremiumFrom his time in office to later, uneasy ties between BJP, Hamid AnsariSubscribe Now to get 66% OFF