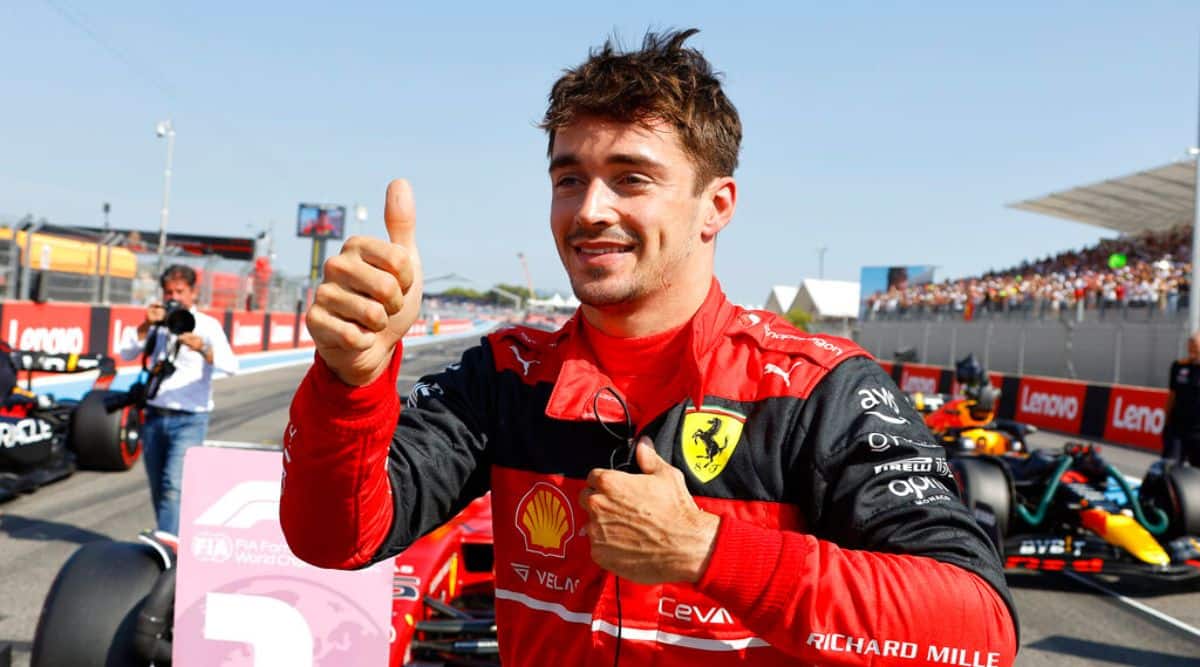 Ferrari driver Charles Leclerc of Monaco celebrates after he clocked the fastest time during the qualifying session for the French Formula One Grand Prix at Paul Ricard racetrack in Le Castellet, southern France, Saturday, July 23, 2022. The French Grand Prix will be held on Sunday. (Eric Gaillard, Pool via AP)

Sainz had nothing at stake since he was starting from the back of the grid after multiple engine-part changes, so Ferrari used him to give Leclerc a tow on his two runs in Q3.

Leclerc was up by just .008 seconds from Verstappen after his first run. The team worked seamlessly on Leclerc’s second run as he beat his own leading time and finished .3 seconds ahead of Verstappen and .46 clear of Verstappen’s Red Bull teammate Sergio Perez.

“It was a great lap. I have to say thanks to Carlos for the help. It was great teamwork,” Leclerc said. “It’s quite tricky to get it exactly right, in the first lap we were maybe a bit too close. In the second lap we adapted and it was a bit better.”

Leclerc thanked Sainz on the team radio after his seventh pole of the season and 16th of his career. It was also a good sign of Ferrari working together, after Leclerc expressed frustration at team orders in Monaco and at the British GP.

“It’s all about trust in the end. Carlos judged it perfectly and got out of the way at the right moment,” Leclerc said. “It would have been a lot tighter with Max without the tow.”

Verstappen said Ferrari’s tactics were “smart” but that it wasn’t something Red Bull could try, since they were both going for pole.

Verstappen was happy with Red Bull’s straight-line speed but had a bit of trouble getting the tires in the right window in hot conditions that are set to increase for Sunday’s race.

“On that final lap I just had two moments that cost me a bit of lap time. But we still have two cars in the top three, so that’s good,” Verstappen said. “It was a bit more tricky than I would have hoped, but overall we have a decent car for tomorrow.”

Sainz’s engine caught fire near the end of the last grand prix in Austria two weeks ago. He was handed a 10-place grid penalty on Friday because Ferrari changed the power unit, and extra engine changes on Saturday sent him to the last row with Kevin Magnussen, whose Haas team made similar engine changes.

McLaren’s Lando Norris was fifth and Hamilton’s teammate George Russel in sixth. Russel was still in the drop zone with four minutes left in Q2, and was worried about a potential yellow flag scuppering his final lap so he asked to come out as early as possible. McLaren’s Daniel Ricciardo was 11th and eliminated.

Sainz qualified ninth and will start 19th, while Magnussen was 10th and goes last.

The first part of Q1 saw Perez momentarily getting in Verstappen’s way.

“What was Checo doing there on the line?” a puzzled Verstappen asked.

Leclerc, meanwhile, was already leading the first run and didn’t see the need for another timed lap.

“I don’t know why we did this second push to be honest,” he said.

After two top 10 finishes at the British GP and Austria, Haas driver Mick Schumacher was confident heading to Le Castellet. But he was among the five drivers eliminated from Q1, along with home favorite Pierre Gasly.

“I completely lost the car in Turn 6. I’m very disappointed, this isn’t the qualifying we wanted,” said a dejected Gasly, who drives for AlphaTauri. “I was sliding in all the turns. It doesn’t make much sense.”

Earlier Saturday, Verstappen comfortably led the third practice by .35 seconds from Sainz and .64 from Leclerc, with Hamilton fourth.

Hamilton is taking part in his 300th race and seeking his first win of the season after three straight podiums.

Ferrari topped both Friday practices through Leclerc then Sainz.

Ferrari is seeking a third consecutive victory following Sainz’s win at Silverstone and Leclerc’s drive to victory in Austria, where he trimmed Verstappen’s overall lead to 38 points.

Red Bull and Ferrari have won the first 11 races between them, with Red Bull up 7-4.

PremiumRahul Shewale interview: ‘Despite our differences and problems, Sena MPs …

PremiumA brush with beauty and mortality in Bhutan, the Land of the Thunder DragonSubscribe Now to get 66% OFF

The atmosphere at the Paul Ricard Circuit in southeastern France was calm compared to some of the boorish behavior at recent races.

'I am the underdog', says UK PM candidate Rishi Sunak

A brush with mortality in Bhutan, the Land of Thunder DragonPremium

ExpressBasicsHow to move WhatsApp chats from Android to iPhone

Sting and Shaggy Teams Up On “Don’t Make Me Wait”

From LeBron James to John Cena: How Austin 3:16 Day was a celebration