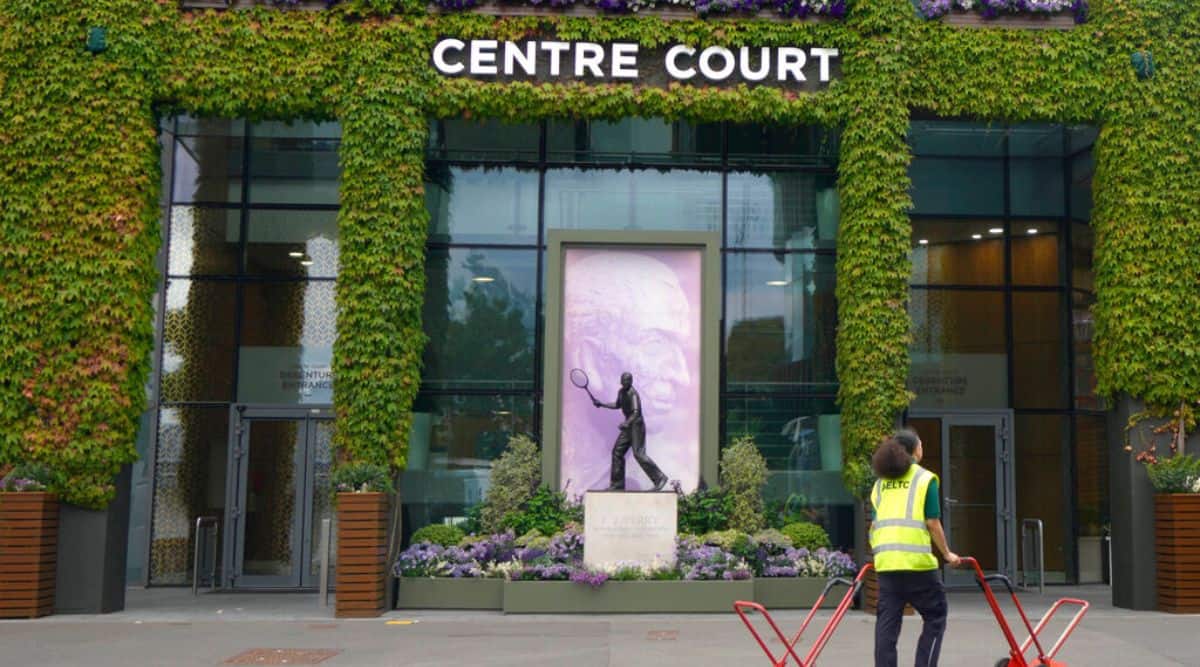 It’s been called the cathedral of tennis and the site of the most famous patch of grass in the world.

Centre Court at the current Church Road location of the All England Lawn Tennis and Croquet Club opened 100 years ago, in 1922, and that centenary is being celebrated at Wimbledon on Sunday — which, in and of itself, is a special occasion, because it marks the debut of scheduled play on the fortnight’s middle Sunday, which traditionally has been a day of rest at the grass-court Grand Slam tournament.

There is a sign on the side of the chair umpire’s stand with the words “Centre Court” and “100.” A unique version of the ever-popular tournament towel for the occasion. A series of votes via Wimbledon.com let fans choose their favorite moments from the arena’s history.

The structure has been updated and improved over time, with new cushioned green seats this year, for example, and, most famously, the installation of a retractable roof ahead of the 2009 tournament. The capacity has grown from 9,989 seats and “standing accommodation” 3,600 when first opened, to today’s 14,974 seats.

What does not seem to have changed is the reverence with which players regard the place.

That sentiment was expressed this way by seven-time Wimbledon champion Sampras after he earned what would be his last match win at Centre Court — or anywhere at the All England Club — by beating Martin Lee of Britain 6-3, 7-6 (1), 6-3 on June 24, 2002: “You step out on Centre Court, it’s like Mecca out there. The U.S. Open, French Open, those are great events, but Centre Court at Wimbledon, there’s something very special whenever you step out there. I feel like I kind of came back home today.”

Some find it all a bit daunting. Some, of course, never get to play there. Some say they’ve gone inside to look around before the tournament begins, just to see it.

Here are the thoughts or recollections about Centre Court from some players of the past and present:

“For me, that was the first experience seeing Princess Kate. She was sitting in the Royal Box, and I could not NOT see her. She’s super beautiful. And I also remember I saw Tom Cruise. It all was a bit overwhelming.” — Karolina Pliskova of the Czech Republic, runner-up to Ash Barty in last year’s Wimbledon final.

“When I would walk on Centre Court (for) a final, there would be like a hush — a hush of reverence, a tingling of excitement — of something that was just going to explode any minute. Sure enough, the crowds would explode. You think about all the former champions, the ghosts and spirits that played on that Centre Court. I do that only at Wimbledon. I don’t do that really at any other Grand Slam.” — Three-time Wimbledon champion Chris Evert.

“I’d imagine that it’s probably a magical place. I don’t want to go in there until I play on the court.” — Tommy Paul of the United States, who faces Cam Norrie of Britain in the fourth round Sunday at No 1 Court.

“I was like, ‘Wow.’ I was 16. More than half my life ago. I was impressed by the elegance.” — Mihaela Buzarnescu, a 34-year-old from Romania, who visited Centre Court when she was playing in the Wimbledon junior tournament, and first played there on Thursday.

“They know the game, so there’s this incredible silence, followed by this great roar. I mean, that happens at all stadiums; there’s something even more so there. There’s no seat that’s bad there.” — Three-time Wimbledon champion John McEnroe on entering the arena.

“The walk to the court is definitely the most nerve-racking, because you see the members’ enclosure. It’s a very beautiful area. They have, I don’t know if they’re guards or whatever, they’re standing in front of Centre Court, looking straight. I didn’t expect that the first time when I came in. I remember being like, ‘Wow!’ You kind of want to take a picture of it. Obviously you can’t.” — Coco Gauff, who played in, and won, her first match there at age 15 in 2019.

Scouting For Girls – Make This One Last Lyrics

Union – You’ve Got To Hide Your Love Away Lyrics